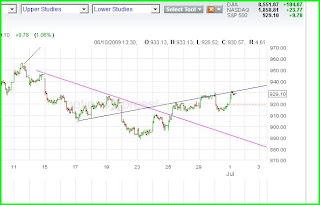 Some of YOU have SHORT term memory loss,
no money is lost unless you close out the position

ONCE wave 2 ends, we will KNOW it for sure as Spx 912.79 will be smashed convincingly

We have posted the target prices several times

the DOW according to Woodson , and please no derogatory comments about him- i dont care
Im just using HIS math

WHEN Wave 2's are elongated, IT means wave 4 will NOT BE
From 8259 we have reached a high of 8575 - a perfect 50% retracement of 310 pts
And they are BANGING upon that line in the SAND RIGHT NOW at NOON
thus matching the SPX 930 high ALSO at the same time

SOOOO
Whats NEXT ??
Today has been pegged by E ZONE as a critical day - not sure what that means-
but it looks like [[IMO a]]] HUGE TURN IS ABOUT TO HIT

What intersting is MANY are projecting MID JULY for that event, and I have projected that
also BUT changed in NOW to JULY9th as of yesterday comments

Yes July 15th has some negative connotations , but I dont think its going to be the LOW
I see July15 as a setback in a rally to Jul22nd as a high

More about this later
Its TOO FAR ahead and NO one remembers what I wrote, except me, and sometimes I forget
Jay
Posted by Jay Strauss at 12:01 PM

So that is not a wave 1 down and we are not in wave 2 waiting for wave 3 down. As Dan Eric shows the bearish scenario is that we are in X of a W,X, Y and in that case Y comes once W is finished, which it did not yesterday.

Dan also has a bullish scenario where 888 was it before going to 1000+ for cyclical top of P2.

Even if we have completed X at 931.57 today to 4 pm close, there does not seem enough time in the to close below yesterday's closing.

Are you still expecting a strong up tomorrow? higher than today's high?

Let me add that it may be counted as 5 down DJI for wave 1, though not in SPX. That can be best resolved by calling the lower low as extended correction when SPX made normal correction within X.

OK NOw
everyone settle down
Heres whats NEXt

then Tomrrow will rebound from a low, but just enuf to test prior support such as spx 912.66
MAKING wave ii of 3

That SETS UP Monday for wave iii of 3,
ITs the day prior to an eclipse
and riddled with negative energy

Once wave iii is complete, we have to endure wave iv
which as previously explained should be trunctated to 13 hours or 2 days
= JULY8th as per FLASH who wants to see that day as a high
ONCE again 26 +13 = 39 hours to
the close of July8th & wave iv

FLASH, are you reading this??
feel free to comment

NEXt comes WAVE v
IF wave iii took ONE day then wave v should do the same
and should be =to wave 1- which we are expecting momentarily.

NOW we have MONDAY JULY 13th pegged as A HIGH energy date
and the mkt should be in SOLID rally mode leading to a JULY 22nd high with only the 15th as a setback day on the way up.
AFTER which the bear shows his claws again

I dont know HOW many times I will have to repost this scenario?

HOW LOW,? low unuf to be called

This morning you were expecting sell off into the closing with strong up tomorrow. Updating your cycle work with the latest market gyrations; how does that change.

So far the downtrend from today's top looks a corrective flag indicating one more hi above 931.46, that may come towards the close.

Thaks jay and ravi, this am I added spx puts. Please visit Cahugner blog. His projections are identical to jasy. Enjoy the down turn guys.
http://chaugner.blogspot.com/

lokat his chart shows 7xx on spx by July 9.
sam

Ravi
thanks for the clarification

However, the OUTCOME should be the same

FLASH- are you reading this?

ALSO
Neptune in retro is backing into another 0 with Jupiter on the 10th at 5am, thus effecting the 9th
And thats another reason why the 90's on the 6th are so powerful
Jupiter can work both directions
especially when meeting with the illusions of neptune and SQUARING warlike MARS

I REALIZE the some of yuo will CUT and RUN- The market does that to you at JUST THE WRONG TIME
I used to get caught in that trap lots of times in the past.

And even when we would get a severe sell off, I would bail out mid day instead of holding till the close

Ok, here it comes
ACTIVITY INDEX has now dropped from
a high earlier today at 233 to NOW at 100 and its NOW 2:45pm

Have a beary nice evening.

Ravi
Consider that wave count
from June11 to July9th

That A, B, C looks right with SPX,using generic terminology, but nothing to say we are done today on B, we could go to around 940 tomorrow . The extension of B, makes it difficult to imagine a C endin next Friday. If we top tomorrow, that is 5 trading days.

For non-EW people note that when the A, B, C you described is labeled within the complex move fro March, it can get labeled X,Y,Z.

NOTHING has changed except moving the translation to the right

EVEN if its tomrrow
there is NO TIME LEFT otherwise.

Monday is setup for a NASTY day

Yes there is something to say it was done at 10;30 this AM