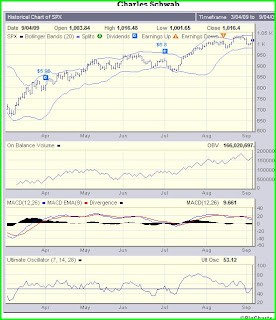 Ravi
Look at the 6 month chart above

OIL looks to base, thus this is good for equities on the TSX/SnP. I think we run up to the 14/15...
Just my view, Thanks Joe

The last two times Saturn was in opposition to Uranus (November 4 and February 5), the market dropped approximately 2000 points within the following month.

Gold spiking on volume , without the dollar dropping , indicates of a crisis soon .
People in the know are buying Gold .

Hi Uk;
I just got that same info from another source + other info

SPT & Oct this year are as precarious as they were last year
with some variations, of course

I will post more info on the
main page tomrrow.

last39hr cycle this month is the 28th

Each of these time points are expected to make PIVOT lows

And some could actually occur at 4pm the day b4 such as the 25th verses the 28th.

NOT a pretty combo, unless your a bear.

Last rise before 9/9/9 - BEWARE of gold and silver, as market will move toward multi year low after this speculative false rise... Thursday, September 03, 2009


A small part from the next weeks’ newsletter I decided to put here:

First, let me apology for my inability to see huge short term move in gold and silver which came Wednesday and Thursday. I never saw this taking place but yes in my subconscious mind I was aware that until 9/9/9 that anything can happen in metals.

One thing that we have learned is that the last 10 days of before Saturn changes, the zodiac house every thirty months brings drastic changes into each and everyone’s life. It can be an emotional moment, huge gains or losses. Many lose their reputation; and on the other hand many gain; for many there is a new beginning and for many, an end of an era. Next week, on 9/9/9, Saturn is changing after 30 months and the current last nine days of Saturn will bring up and down everyone’s life.

The financial market is a very sensitive market, and Saturn will give huge impact in a trader’s life, so until 9/9/9, there will be tough times for many and a new beginning will take place from a fresh or zero. For many rises will turn into falls, and many of those who are struggling will make new beginning toward new journey after 9/9/9.

Gold and silver enjoyed and want to take maximum benefits before their bad period starts and on other hand US Dollar is going through fighting period before Saturn changes on 9/9/9. It is always very crucial period before you enter into new era of Saturn and that can be either negative or positive.

Many of those whose good times are about to change may go through with huge pain of this last 10 days; and for them like world is ending, but that not the case because planets have their own game. Here, I predict that those who are going through a rough patch will get a great new beginning and people those who doesn’t feel comfortable after 9/9/9, will be sign of negative time so they shouldn’t do anything aggressive or speculation for the next 30 months so please, monitor your life and don’t ignore if there is negative sign. Those who start feeling better after 9/9/9 should work hard and they will be on top of the world within 30 months…. Complete part from here will be in our next week’s newsletter.

Few hours back arrived in Mumbai-India, and gold and silver are on fire once they broke out important resistance levels, gold investors jumped in to acquire positions once they saw that it got broke out from important level and also many short must close down because of huge move. Our stand s unclear until 9/9/9 in metals but our future prediction of gold reaching $550 and silver around $6.45 is very much standing there with in next one year so it is great time to take puts or sell call (options). Anything can happen at this stage like what happen in oil after it broke $109.80, and went to $145 but gold and silver has time problem because their best time is ending on 9/9/9 so this is last move. I am warning investors to stay away as I see gold and silver as most depressing period is starting after 9/9/9 and prices will reach multi year low in 2010. Maximum side gold may rise up to $1002 to 1007 and silver $16.32 to 16.48.

Copper and other base metals will keep moving down without any further rise.

I know on one is agreeing with our prediction of gold going toward $550 and silver $6.45 but time will tell.

Dollar is trading the way we saw and it should trade positive and let’s see how it fights until 9/9/9 because after 9/9/9 open sky for USD. Melt down in currencies is on the way and Dollar Index will reach historic high more than 150 or even 250.

Grains should bottom out but wait for right timing as they can fall more before they rise and our newsletter will guide you. Corn and Wheat will bottom out first around $281 (corn) and wheat $421.

Oil to remain down but gas may have huge move with in five to seven days.

Stock market will remain in sideways trend but we are watching very closely as either crash or big rise will start soon. If in the month of September all markets rise then we expect 30% crash in October.

Everything else you follow as per newsletter prediction, just metals is trading differently and why not they want to take maximum out of last nine days.

Two strongest trends is on the way after 9/9/9.

RISING TREND IN US DOLLAR

And this particular episode is unlike anything we've seen since the emergence of the credit crisis. The above table – which has appeared here several times since the onset of the financial crisis – depicts bear market rallies and declines in the 1930s. Thus far, the Dow has gained a cumulative 45% since March 9.

The biggest bear market rally in the 1930s occurred after the stock market crashed in 1929, and it lasted 22.1 weeks resulting in a cumulative 48% gain for the Dow. This rally has lasted 25 weeks.

I suspect this market will hold above the March 9 lows for the remainder of the year but will suffer a sharp 15% correction or worse before December. Stocks will probably rebound once more because the market is blinded by inventory reduction, low inflation, super low interest rates.

The economy is in much worse shape than these statistics indicate. And, by the spring or summer of 2010, I expect the market to tank again – possibly taking out or testing the March 9 lows.

What will trigger the next big plunge in risky assets?

I would guess it's an event that hasn't been discounted by the market – like commercial real estate loans or soaring bankruptcies. It'll probably be something out of left field. This might include a major corporate bankruptcy, a chain of defaults in the emerging markets or a sovereign currency devaluation in the euro-zone. Anything is possible.

One thing is for sure: whatever comes next in the form of bad news hasn't been reported in Bloomberg, The Financial Times or The Wall Street Journal. The markets need to be shocked into submission again. And the bear will do just that next year.

We're looking for the markets to move lower into 9/14. Also expect a retest of those lows around 9/21.

Thanks for posting those messages and other prophecies

I hope it doesnt get my members OFF Track

WE tend to be day traders here, or short term position traders of a few days as I am.

propens index and POWER index AGREE WITH DOWN SIDE projections
TOMRROW
and
!80 bars + Astro + 39 hr cycle STILL looking at either 4pm on 9th and or 10am on 10th for a PIVOT low

World stock markets rallied during the USA labor day. It sure looks like the bears will get skinned on Monday

"Thanks for posting those messages and other prophecies"
Does he or she have permission from
Mr. Mahendra to publish it.
Flash news are member subscribed
news alert.

Mr. Mahendra is letting his news out for free this week account of his birthday

Perhaps, it is best to stand aside and watch how this muddle resolves.

everything else is yadayadayada