NOTHING has changed, and the EKG DAILY projection is STILL HOLDING an
80% accuracy record since Jan 2011 - which is simple to check out - just go back to January
and review each projection against the actual which is also posted every eve after close
It might take a few hours, but have at it. 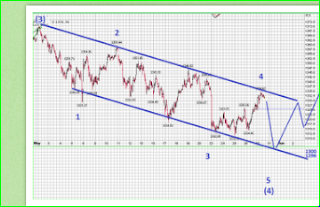 Im labeling the May correction from 1 to 5 , but it might be more properly labeled a-b-c-d-e

It really looks right for the numeric labels, as wave 3 broke out into 5 waves of its own.

We will really be able to tell better in retrospect, but for our purposes and for actual trading
it doesnt matter right now.

However, I was told by an Elliotter that numbers are impulsive, and letters are corrective.
Numbering infers wave 1 will end at 1296 area, and IMO thats tomrrow.
but IMO, It looks like a 4th wave with 5 to follow starting June1st as previously proposed.
We shall know the answer shortly as a wave 2 should not recover more than 78.6%.

We do know that wave 3 top at 1370 on May 2nd did recover 78.6% from the March 9th low.
and could also be the target for a failed 5th wave or ending diagonal which shows exhaustion of the trend.

more later
Jay
ps- thanks for responding to my OFF TOPIC - we need to remind POLITICIAN'S they work for US.
And we can get rid of them just as easy as it is to vote them out.
thats whats great about this country, WE CAN WIN WARS WITH WORDS.
Posted by Jay Strauss at 6:51 PM

jay..s%p futures up in early trade..where will it go for you to cut and run long?

Seriously, I don't see how you can tout your accuracy when every day you call for a dramatic decline...and when it doesn't happen you delay it for another day or two. Thanks for the lesson in following yourself and no one else.

Amen........that's my point and then tout %80 without ANY statistics......AND then pound for DONATIONS and now try to now sell a course around this % of accuracy! LIKE I SAID DEMAND A 3 YEAR TRACK RECORD OF RESULTS NOT SMOKE AND MIRRORS! Don't be a fool with your hard earned money!

Heres the type of crap tha tis out there........for the new ppl trying to learn!! I have sent on the specific claims for review!